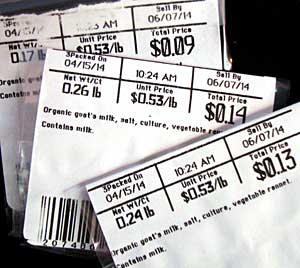 I recently had an experience that caused me to appreciate the tranquility that comes from living in alignment with my own sense of right and wrong, even though I don’t have everything all figured out.

Some weeks ago I was shopping for cheese to use as an hors d’oeuvre at a dinner party. As I collected an interesting assortment, I noticed one of the cheeses I picked up was marked with a ridiculously low price. It had to be a mistake. It was around closing time, so there was no one to straighten it out. What should I do? My first reaction was to simply put the packet back in the case and walk away. But then I wondered if I should consider the mismark a boon. I actually picked up the packet and put it back several times. As I pondered, I fished through the cheese and found two more packets with the same mismark. I was about to walk away for the last time without the cheese when I was struck by the thought, “If you don’t take advantage of this, someone else will.” Where did that come from? Potent motivation. I grabbed all three packets.

I wondered if the checker would notice and what he might say. Well, if he did, I would simply surrender the cheese. I wasn’t attached either way. And that would be a good way to get those packets corrected – and prevent someone else from cashing in. Ha! Oh brother, look at me!

Funny enough, the checker did notice, but he took a neutral position. As he examined the label I said, “That’s quite a deal huh?” He replied, “I doubt that’s the right price, but we’ll go with it.”

I walked out of the store feeling bad about the transaction. I had conversations with Jiminy Cricket all night. I desperately wanted to come up with a rule I could depend on in circumstances like this without having to think about it. I reverted to my first reaction, “If you have a question about a situation, walk away from it.” But that wasn’t entirely satisfying; it might keep me clear of internal conflict, but at what expense to my soul? After awhile I decided it was folly to come up with a rule. I was pretty sure the universe would make the next challenge just enough different from this one to confound any rule I might come up with.

After I got over the emotional charge, I decided it was actually important not to walk away from this situation. It was important to challenge myself in order to grow. This inspired another maxim: “Don’t stay out of the game – play with things as they come up, only hold them lightly.” Yes! I felt sure the important thing was to engage with as much as I could have fun with.

The more I thought about it, the more it seemed to me that the crux of the matter was holding things lightly. The lighter I could be about a situation, the more flexible I might be with options. To the degree I could maintain a playful mood, I could weigh alternatives without the bias of emotional charge.

By the next morning I had worked past judging myself and was all excited about the adventure of making things right. I was resolved to bring the price tags back to the store when the cheese manager was in and see about paying the correct price. I felt sure the interaction would be interesting and fun, now that I was back in a playful mood.

It ended up taking me ten weeks (!) to get back to that store. (It isn’t where I normally shop.) The cheese lady was in. I explained the circumstance and showed her the tags. She laughed and said I was sweet to come back and reconcile. She remembered being surprised that she sold out of that cheese so quickly; then realized she had mismarked them. She mentioned she had met the people who make that cheese and that they are really nice. She got me the correct price and told me I could settle up with any front clerk.

So I had to explain the situation all over again to a checker. He thought I was nuts. “Sounds to me like you got a good deal and you should leave it at that. Are you sure you want to do this?” I was patiently resolute. He huffed as he calculated a new total and subtracted what I had already paid. He believed mislabeling was the store’s problem, not mine.

One thought on “A Clear Conscience”